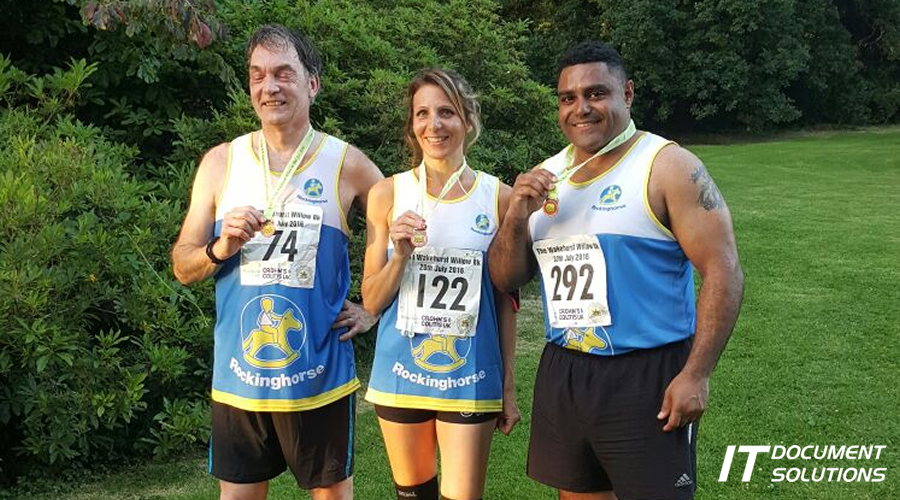 It was 30 degrees on a perfect summer’s day with the glorious woodland backdrop of the Wakehurst Place gardens.

It was 30 degrees on a perfect summer’s day with the glorious woodland backdrop of the Wakehurst Place gardens in magnificent condition with over 260 runners raising money for Crohn’s and Colitis UK and other individual charities. The event in its first year was hosted by the Haywards Heath Running Club and was sold out within a few days of the tickets being released. In the Inaugural Wakehurst Willow Run, the stage was set for what can only be described as a festival of running, with all shapes and sizes, ages and abilities, taking on this hilly and challenging course.

IT Document Solutions decided early on that an important part of running a successful business was teamwork and the opportunity to help others. Both business owners have supported charities of all sizes over the years holding successful events and participating in others when possible.

RockingHorse is a local charity in Sussex raising money to assist in the day-to-day running of The Royal Alexandra Children's Hospital. Members of ITDS Director Jermaine Weeden’s family work in paediatric care and his mother volunteers at East Surrey Hospital in the neonatal department. A father and friend to parents who have relied heavily on the care provided by the brave and highly trained staff within our hospitals, Jermaine went on to say “giving back isn't a chore nor do we feel a burning obligation, however, it's a very rewarding experience which we embrace at IT Document Solutions”.

Through friends, family and suppliers ITDS managed to raise £615.74 (including gift aid) at the Wakehurst Willow run and is looking at other challenges throughout the year to raise much-needed funds for their chosen charities. Director Mark Dansie and his wife supported Action for Kids at the recent Canary Wharf Beach Volleyball competition which is their yearly fundraiser. Mark often competes in Triathlons raising money for Marie Curie Cancer Care. We also have the pleasure of confirming ITDS will be supporting Combat Stress over the coming years, helping our brave servicemen and women return to life after active duty.
For details visit www.itdocumentsolutions.com/giving-back or follow us on Twitter @ITDSknowledge